The idea of shopping local is one that most people support but often don’t do in practice. On Monday, some of the region’s biggest employers sought to change that. 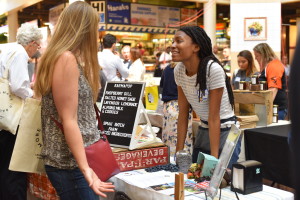 Krystal Mack, a School of Food Graduate sells her product line of Karma Pops at the Vendor Fair.

At the second annual “Made in Baltimore” Food Vendor Fair, more than 100 hospitals, colleges, hotels and other institutions came to Lexington Market to sample foods from around 30 Baltimore based food businesses and to forge relationships with those vendors. “It’s a neat economic development strategy,” said Kurt Sommer, director of the Baltimore Integration Partnership, one of the event cosponsors. The fair’s goal is to bring together a “core set of buyers” that have the resources to help small businesses grow, said Sommer.

Among those core buyers at Monday’s event was Johns Hopkins University’s dining services department and its catering arm, Bon Appetit. The university came to the fair last year in an effort to bring more local culinary businesses to campus. “For us, finding them here shows they’re growing,” said Bill Connor, director of dining programs at Hopkins. The university already does business with several of the vendors that attended Monday’s fair and plans to reach out to a handful of new businesses. Connor and Vincent McPhail from Bon Appetit hope to launch partnerships with coffee roaster Thread Coffee and ice pop maker KarmaPop, both vendors they met at Monday’s event. The challenge for Hopkins and other large institutions looking for food vendors is getting those small businesses to meet scale requirements for large orders.

“We start small with them and grow together,” said Connor. To help the businesses grow, Hopkins offers the support needed to scale its orders. For example, if a business needs more equipment to fill an order, Hopkins is willing to pay for that equipment with the expectation that the business will fill larger orders in the future, said Connor. The university has used that model with Taharka Brothers, a socially conscious ice cream and dessert manufacturer in Baltimore. The nonprofit company started in 1999 as a social enterprise business designed to offer job training opportunities in Baltimore. In 2010, Taharka became a for profit that used ice cream to encourage conversation about social issues. For example, Taharka has flavors based on books, plays and even one called “chocolate lives matter.” “We tend to use our flavors to tell stories,” said Sean Smeeton, founder of Taharka Brothers. The company offers 60 to 70 flavors throughout the year and has contracts with hotels, restaurants, scoop shops and several area universities, including Loyola University Maryland, Goucher College and MICA. Taharka also has an ice cream truck in Hampden. Smeeton participated in Monday’s fair to get contracts with big local institutions. Since partnering with Taharka, Hopkins has been able to scale its business with the company and has knocked big name ice cream brands off its campus eateries, said McPhail from Bon Appetit.

Another organization that’s trying to fuel economic development through food enterprises is City Seeds, the social enterprise arm of Humanim, a nonprofit that offers workforce development services. Last year, City Seeds launched School of Food, a training program in Baltimore for people who want to open a culinary business. Six vendors at Monday’s event graduated from the program.

Deborah Haust, director of City Seeds, said she has seen a shift in Baltimore’s culinary scene toward supporting businesses that use locally sourced ingredients and have a strong social mission.

“They’re willing to put their money where their mouth is,” said Haust. 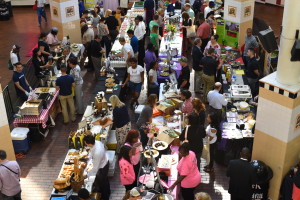 Dominic Nell was a photographer for City Seeds and was inspired by the program to open his own microgreen business. He learned how to grow microgreens at CityHydro, a vertical farm in Baltimore’s Fells Point neighborhood. Nell has been in business for just three months and was at Monday’s fair to get into farmer’s markets at hospitals, such as the one at Johns Hopkins Hospital.

Nell believes microgreens can be used to bring fresh, nutritious food to places in Baltimore where people don’t have access to supermarkets, including his neighborhood of Sandtown Winchester. Nell sells his greens at the Fresh at the Avenue produce stand in West Baltimore.